If you’re interested in the goings-on of the Java language, be sure to check out my new Web Series on IBM Developer called A Strong Cup of Java.

The show will focus on interesting topics in the world of Java.

Episode One is about Jakarta EE, where I talk about what Jakarta EE is, and how it got its name (whatever happened to J2EE?).

Episode Two covers the launch of Jakarta EE 8 (the first release of enterprise Java since Java EE 8 in 2017) that happened on September 10, 2019 in an all-day live stream called JakartaOne.

In the coming weeks, there will be eight more episodes published (I have a 10 episode committment from IBM for the series). With your support there may be more, so please watch!

Click here for the show notes page at IBM Developer.

If you have ideas for topics, please let me know. Thanks for reading!

Welcome to Java News and Code, where I tell you about interesting goings-on in the world of IT in general, and Java in particular.

The announcement on the Oracle Blog says that as the summer ends, releases wrap up, and JavaOne 2017 approaches, this is an “…opportunity to rethink how Java EE is developed in order to make it more agile and responsive to changing industry and technology demands.”

As InfoQ points out, Oracle has been criticized regarding how it’s steered Java EE in the past, which has led to efforts such as the Java EE Guardians, a group “…committed to moving the Java EE platform forward through active community participation and advocacy.”

Reaction outside Oracle seems to be positive, with IBM’s Ian Robinson weighing in on the WASDev blog saying, “…we are delighted that Java EE is moving with the times to an open foundation for its ongoing development following the completion of Java EE 8 this year.”

So who will take over Java EE?

Responses to an unofficial Twitter poll by Java EE Guardian Reza  Rahman asking that question seem overwhelmingly in favor of handing stewardship of the platform over to Apache.

So what does this mean for Java EE? It depends on whom you ask, but given the popularity and prevalence of the platform, I’m sure it will stay in good hands.

Be sure to check out the show notes page, where you can find more information on this story, and everything I talk about in this episode.

We’ve been following Android O for some time now here at Java News and Code, and at long last, Android O, named Oreo, has been released!

For users, Android Oreo has a bunch of new features, some of which are immediately obvious like picture in picture, and per-app notification options.

Other changes like background limits, are designed to improve device responsiveness and extend battery life.

For developers, things get more complicated. The optimizations and improvements come at a cost, which will be paid on the development side. And rightly so.

What does that mean for developers like me, who have apps in the Play Store?

For now, probably not much. Oreo is not even showing up on the Android Dashboard as of today, but of course, it’s only a matter of time.

Android Marshmallow has the single greatest share of installations, and it was released in October of 2015, coming on two years. So we have time.

But as developers we need to be ready. Fortunately, there is information available already to help us get ahead of this, like this video on the Android Developers YouTube channel.

This release is huge, there’s no denying it. And in my opinion totally worth it. Check out this article at Gizmodo, that lays out 11 cool new features in Oreo.

Be sure to check out the show notes page, where you can find more information on this story, and everything I talk about in this episode.

The GA release is scheduled for September 6th, according to the milestones page.

For this episode’s code talk through, I want to show you how to create a Maven archetype that you can use to create new projects that will come with JUnit 5 dependencies and boilerplate code.

The source code for the archetype is available in GitHub. And in this episode I want to do a quick walk through of the code for a Maven archetype, how it’s structured, and how to use it to generate a new project.

First, clone the code from GitHub. Open a Terminal window, navigate to the directory where you want the code to land and execute the git clone command:

Next, import the code into Eclipse.

With the code in Eclipse, let’s take a quick tour. Expand all of the nodes in the source tree. Open the src/main/resources/META-INF/maven/archetype-metadata.xml file, which tells the archetype generator what source files, test  source files, resources and so forth you want to be included in new projects generated from the archetype.

A Maven archetype project is itself a Maven project, so there are two POM files to deal with:

The one that controls the archetype project itself, located in the project root:

And the POM file that will be included in any projects created from the archetype, src/main/resources/archetype-resources/pom.xml.

The archetype project also includes boilerplate code like this:

To use the archetype to create new projects, you first have to build the archetype project itself. Like I said, it’s a Maven project, so to build it go to Run As > Maven Project and specify the install and archetype:crawl goals to install it in your local Maven repository, and update your local archetype catalog, respectively.

Next, make sure the archetype is included in your local Maven archetype catalog, which is located in the repository root in a file called archetype-catalog.xml. And there it is.

Now, I can use that to create projects in Eclipse. First, make sure Eclipse recognizes the local maven catalog. Under Preferences > Maven > Archectypes, click on Add Local Catalog. Browse or enter the path to your local archetype-catalog.xml file, give it a description you’ll recognize later, click Ok. Then Click Apply and close.

To create a new project based on the new archetype, go to File > New Project > Maven Project. Click Next. Click Next again. Select the archetype in the list, and complete the wizard.

When the wizard completes, you now have a new project based on your custom archetype!

How cool is that?

For a detailed walkthrough of this, check out this video.

Well, that’s it for today’s episode. Be sure to check out the show notes page, where you can find more information on this story, and everything I talk about in this episode.

Thanks for watching Java News and Code (and reading this post).

I’ll see you next time.

Welcome to Java News and Code, where I tell you about interesting goings-on in the world of IT in general, and Java in particular.

Java Still on Top (but Falling) 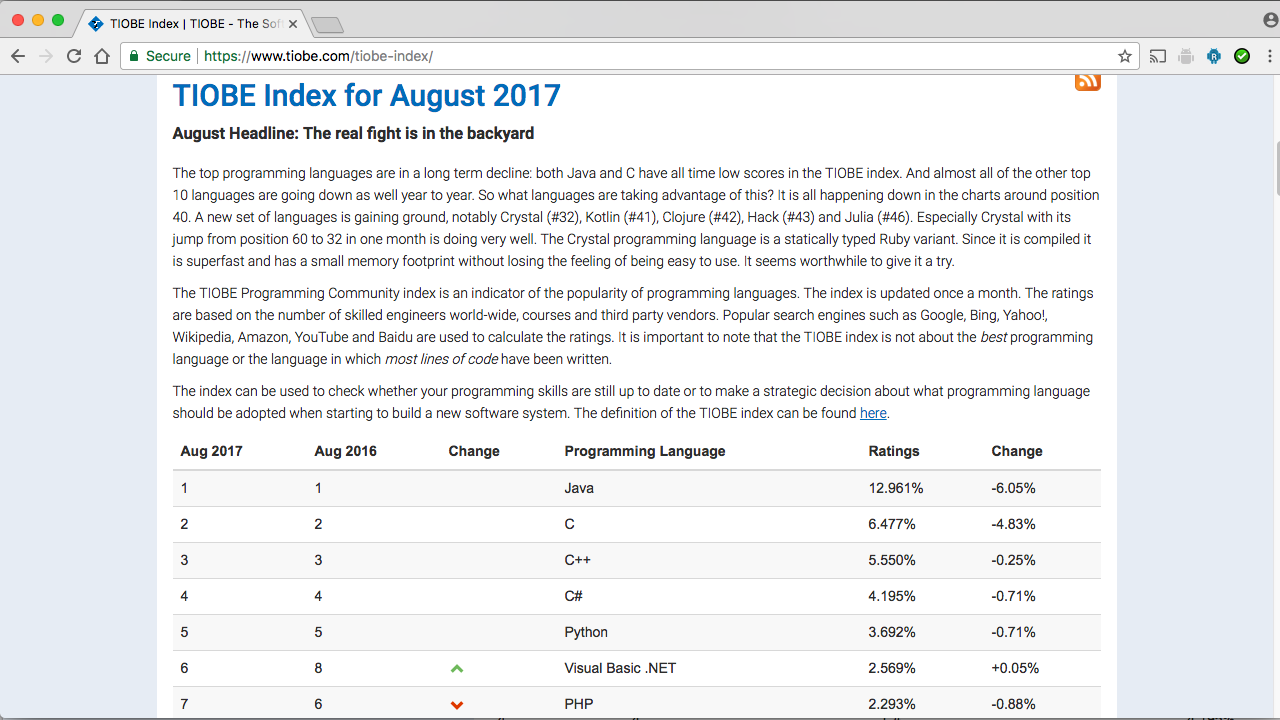 According to the Tiobe index for August 2017, Java is at #1 and still has a commanding lead over all other languages. But its percentage score has fallen to about 13%, down from just over 19% a year ago.

Scroll down on the page to see just how far ahead of the pack Java is:

From the graph you can see Java had a similar drop back in 2004 from which it rebounded strongly, so maybe this is a temporary trend. Who can say?

If you want to see how the index is put together, you can visit this page.

The Tiobe index is put together during the first week of each month.

Make sure and check out the show notes page, where you can find this story, along with all the links in this episode of Java News and Code.

So be sure to check that out.

Android O Final Preview is Out

On July 24th, Android O Developer Preview 4 was made available.

Preview 4 is the final preview before the official O release later this summer:

Preview 4 is a Release Candidate build of the Android O platform, and while it doesn’t have any new features, it contains the final system behaviors, bug fixes, and the final API (level 26).

And if you want to use Developer Preview 4, it’s recommended that you download Android Studio 3 Canary 1 as well, available in the Canary channel.

So be sure to check that out.

Code Talkthrough: Android and the Cloud

Finally, in today’s code talk through, I’d like to show you a recipe for building a RESTful web service application, deploying it to the Bluemix cloud as a Cloud Foundry application, and building an Android app to communicate with it.

The code I’ll show you is available in GitHub, and is from a recipe I wrote for IBM developerWorks called Android and the Cloud.

To follow along with the video, you will need a Bluemix account, JDK 8, Eclipse, WebSphere Liberty, and Android studio installed on your computer.

You will need three projects from GitHub also:

In today’s show, I’m just going to show you the high level steps.  The recipe walks you through it step-by-step if you’re interested in reproducing this yourself, which I hope you are.

First, clone the code from GitHub for the two web services projects.

Now import the code into Eclipse.

With the code in Eclipse, build the oDoTCore JAR file using Maven, specifying the install goal so the JAR file gets installed to your local Maven repository.

Locate the WAR file in the target directory, and copy it to the WebSphere Liberty droppins directory.

To verify the WebService is working, go to a browser and access this URL

When you see the JSON message, you know you have everything built and packaged correctly.

Now I’ll bundle the WebSphere Liberty server, including the WAR file, and deploy it to Bluemix.

For this part I need my Bluemix credentials, and the route I want to deploy it to.

I’m going over this fast, I know, but this is just an overview. The recipe has all the details.

Once I’ve deployed the application to Bluemix, I can test it and make sure it’s running. Open a browser, and hit this URL:

Again, when I see the JSON message “Hello from the server side!” I know it’s up and running.

Now to build the code for the Android app, run the app in the Android Emulator, and access the Web Service running in Bluemix.

First, pull the code from GitHub:

Now import the code into Android Studio, and run the code in the Android Emulator. Choose the virtual device you setup when you installed and smoke tested Android Studio. It takes a minute or two for the device to start.

Verify that the URL is correct (if not, change the code and run it again), and click the Info floating action button to invoke the Ping method. If you get back a Toast message that looks like this, then you’re good to go: 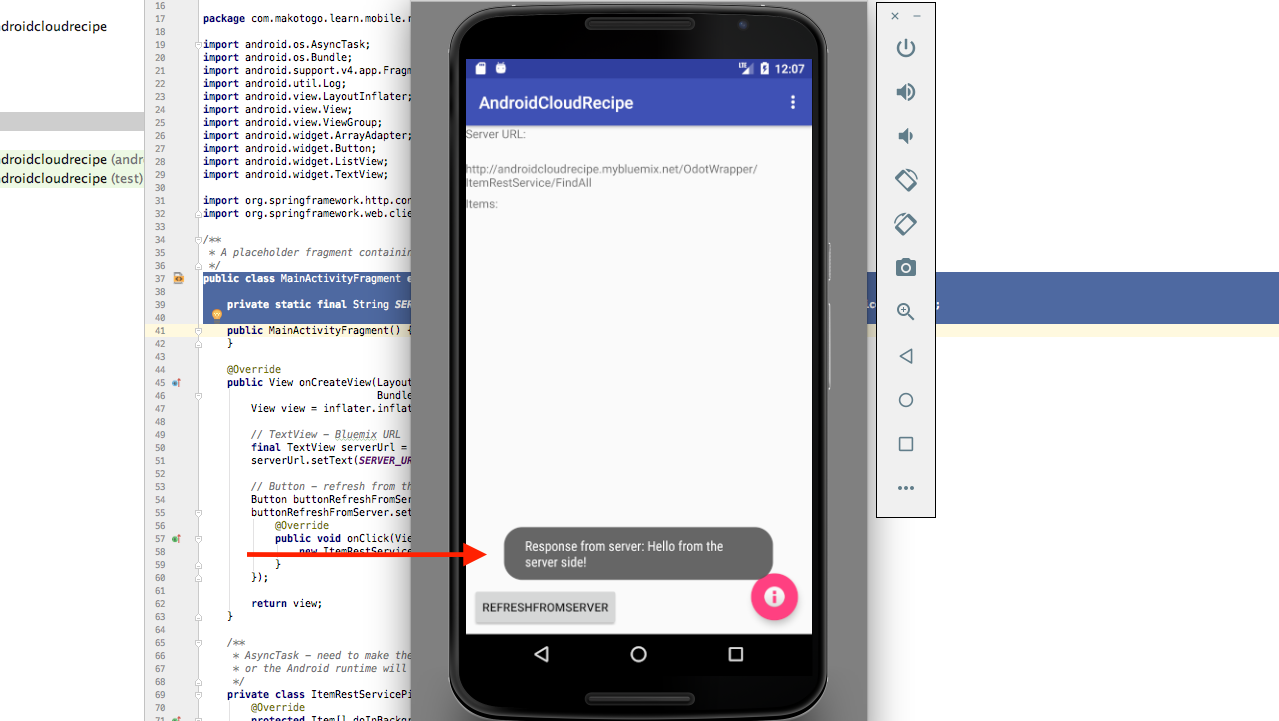 Under the hood, the Android app receives the JSON message we saw earlier in the browser, and is rendering it as a Toast message.

And that’s how you connect an Android app to an application running in the Cloud!

The developerWorks recipe has the steps broken down in much more detail, so be sure to check that out.

That’s all for this episode of Java News and Code.

Make sure to visit the show notes page, click the subscribe button, and you’ll be notified each time a new episode comes out!